Vocal Production and Perception in Songbirds

I currently investigate various songbird vocalizations to gain an understanding of the vocal complexity
involved in both the production and the perception of these signals. Songbirds produce a wide variety of songs and calls, however the functional uses for many of the vocalizations remain unknown.

By conducting research both in the field and in the laboratory, as well as analyzing the features of the produced songs and calls themselves, we can begin to elucidate the “language” of songbirds, and attempt to correlate their vocal production with the observed behavioural output. 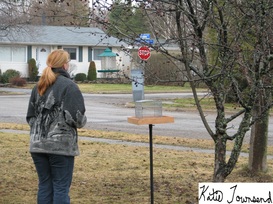 PhD: University of Alberta
(2002-2007)
Working under the supervision of Dr. Christopher Sturdy, we analyzed and described the “chick-a-dee" call of the mountain chickadee (Poecile gambeli) and further showed, using operant conditioning, that both black-capped (P. atricapillus) and mountain chickadees easily discriminate one species’ calls from the other. In a series of studies, we found that this skill did not rely on previous experience with the other species, and that their rearing experience (i.e, reared in the laboratory among either adults of their own species or adults of the other species) did not affect this ability. Further studies determined that birds utilize the terminal “dee" portion of the call to perform species discriminations, leaving the function of the introductory “chick-a" portion unknown.


MA: Queen’s University
(2000-2002)
Working under the supervision of Dr. Ronald Weisman, we analyzed and described the “chick-a-dee" call of the Carolina chickadee (P. carolinensis). This call differs from its chickadee relatives in terms of the particular note types that constitute the call and the rate at which the notes are produced in the call. These features can presumably be used by both Carolina chickadees and black-capped chickadees in distinguishing one species from the other, which would be necessary in regions of sympatry. To further exemplify this fact, we used operant conditioning procedures to provide evidence that indeed black-capped chickadees discriminate their own calls from Carolina chickadee calls, and once discrimination training is completed, they can transfer their learning to novel calls.